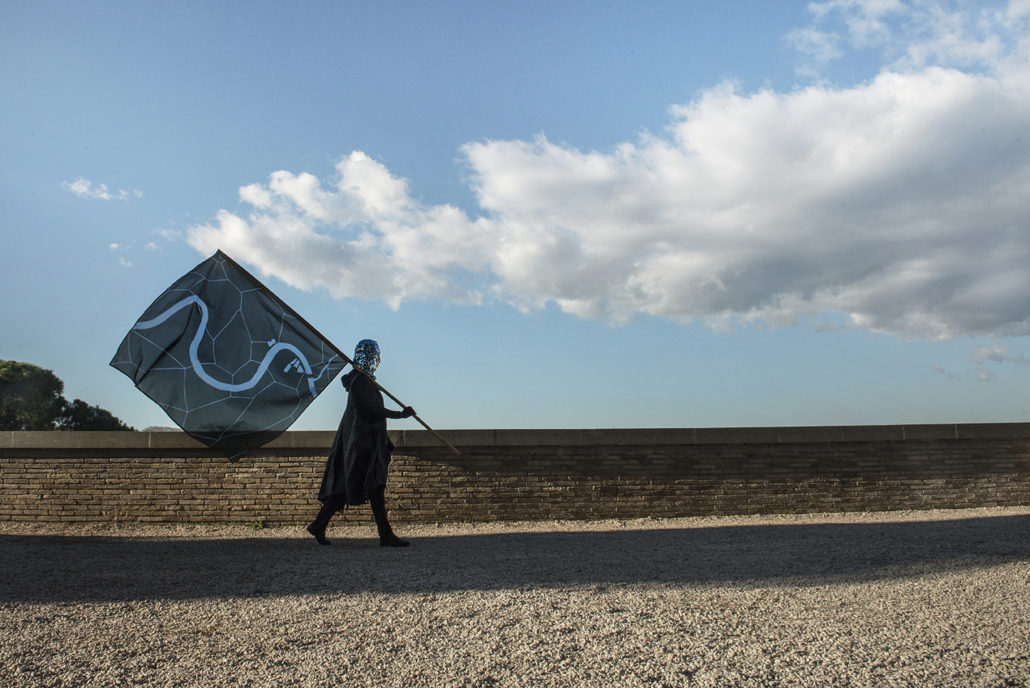 “Like a flooding river. Like water when, seeking for equal distribution, occupies the spaces it encounters, taking its shape. Mutability and adaptation, changes in state, water hammers, sudden and unstoppable peaks. We are the Tiber crying for justice.”

Visual artist Andreco directed the Parade of the River Tiber – Parata Tiberina degli Inizi, a collective performance which aims to shed light on the environmental and climatic issues related to the river Tiber, the green spaces of Rome and the planet. Today he is making an open call.

The parade saw the participation of almost a hundred people including performers, musicians and technicians, and the collaboration of actors, the voices of the choir of Teatro dell’Opera of Rome, the musicians of the National Academy of Santa Cecilia and Demetrio Castellucci (AKA Black Fanfare).

Starting from the Tiber Island and arriving at Basamento Aventino, passing through Foro Boario, heart of the historical centre of Rome site of several temples dated back to 300 a.C., on a day without traffic and cars, the performers made their way through the crowd at a slow and conscious pace. Carrying an amphora containing the waters collected from the quayside of the Tiber Island and flags depicting parts of route of the Tiber, they escorted the river paying homage to its past, present and future. An artistic performance, intrinsically political and social, which lent itself as an opportunity to reflect on the relationship between the citizens of Rome and its main river.

The Parade of the River Tiber drew inspiration from ancient Roman and pre-Roman myths, such as Tiberino, the venerated divinity protector of the Tiber, and from the philosophical theories related to Deep Ecology, which promote a passage from anthropocentrism to ecocentrism, up to some of the latest scientific research. These include studies on the sustainable management of water resources, ecosystem services and Nature Based Solutions, techniques that use nature to solve environmental problems.

After working on the Ganges and Yamuna rivers in India, the Gesso and Lo Stura rivers in Piedmont, in recent years Andreco has focused on the Aniene and Tiber rivers of Rome. Creator and founder of the association Climate Art Project, it is with this that he undertakes, together with a multidisciplinary work group, art and science projects related to environmental issues. The association is now launching an open call to the city of Rome, to its civil society and individual citizens, to begin collaborative and multidisciplinary processes aimed at the regeneration of its river system and green areas. These are crucial elements for the life of the city and its inhabitants, fundamental for their ability to mitigate temperatures and the heat island effect, for biodiversity and CO2 sequestration, as well as improving air quality.

It is an exciting challenge that requires a collective effort: The Tiber and Aniene for years have been polluted and forgotten, today they are reclaiming justice.

Berlin, Paris, London, Prague, live also thanks to their rivers. In Rome we would like to imagine together green corridors alongside the rivers and give back to its citizens paths sheltered from traffic. What if we leave the green floodplain areas free, favoring the regenerative processes of the river? What if we block polluting discharges and prevent hydraulic risk? What if we improve biodiversity, increasing the autochthonous flora with water regeneration capacity? What if we favor the phytoremediation processes of the waters and of riparian and non-riparian soil? What if we create new green spaces and use sustainable mobility to connect these with each other? Let’s start implementing building with nature and nature based solution practices. Let’s give space to new social, artistic and cultural projects. The river and parks must become spaces for encounters, socialization and cultural experimentation.

These are some of the themes that we believe are important for the future of the green spaces and rivers of Rome. Several of these issues are not new to the citizen debate, and have already been mentioned by various subjects of civil society, social and environmental movements and institutions. The time to act has come.