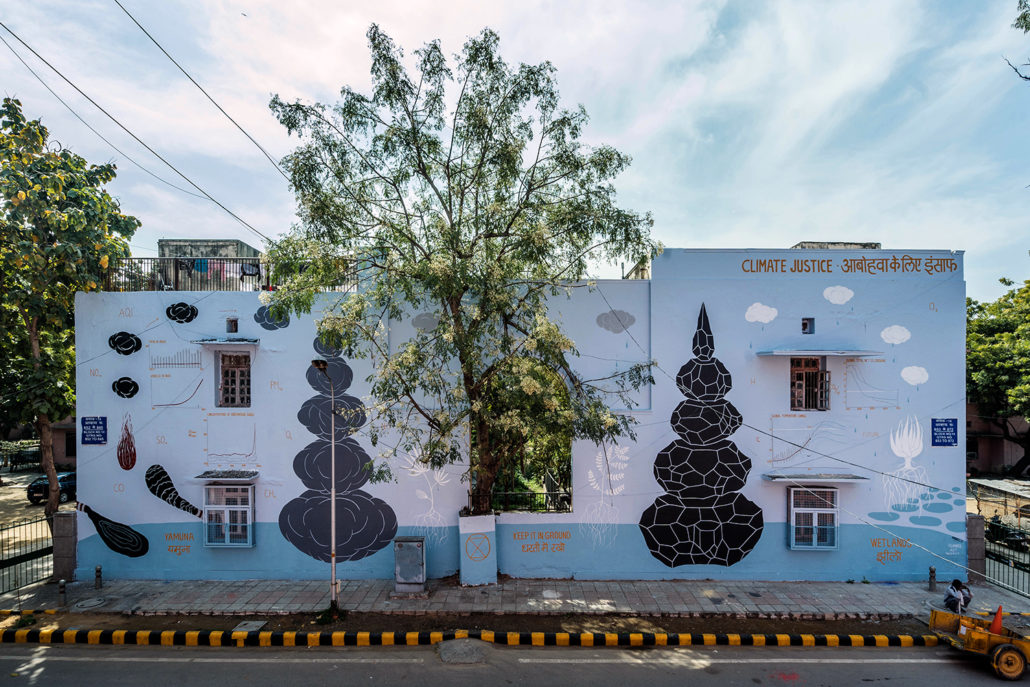 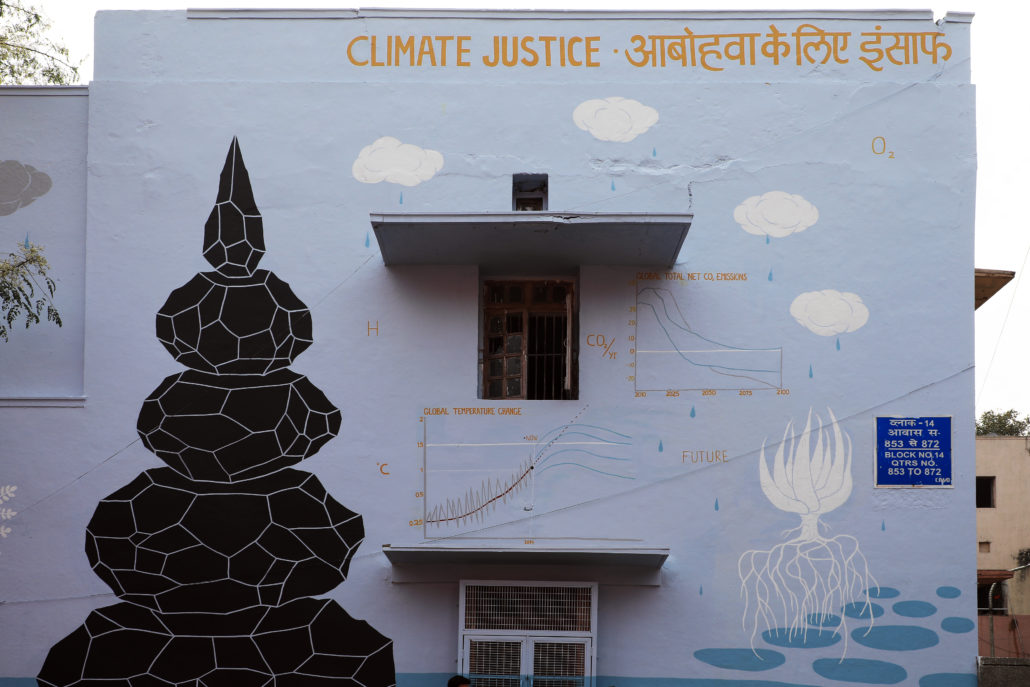 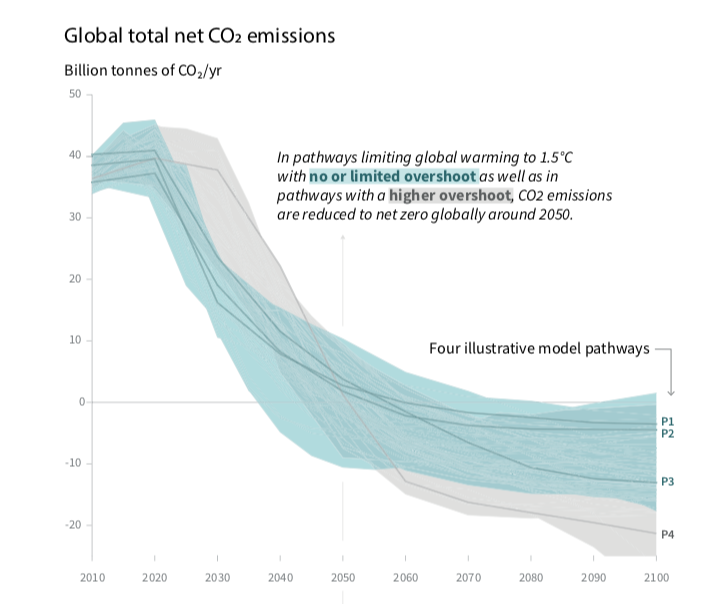 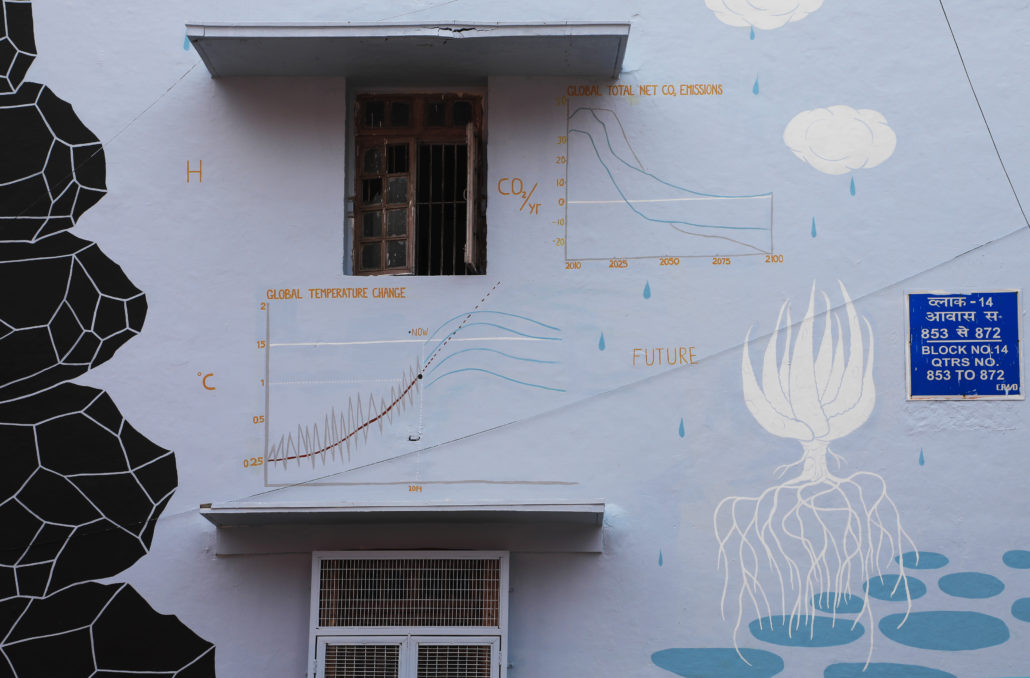 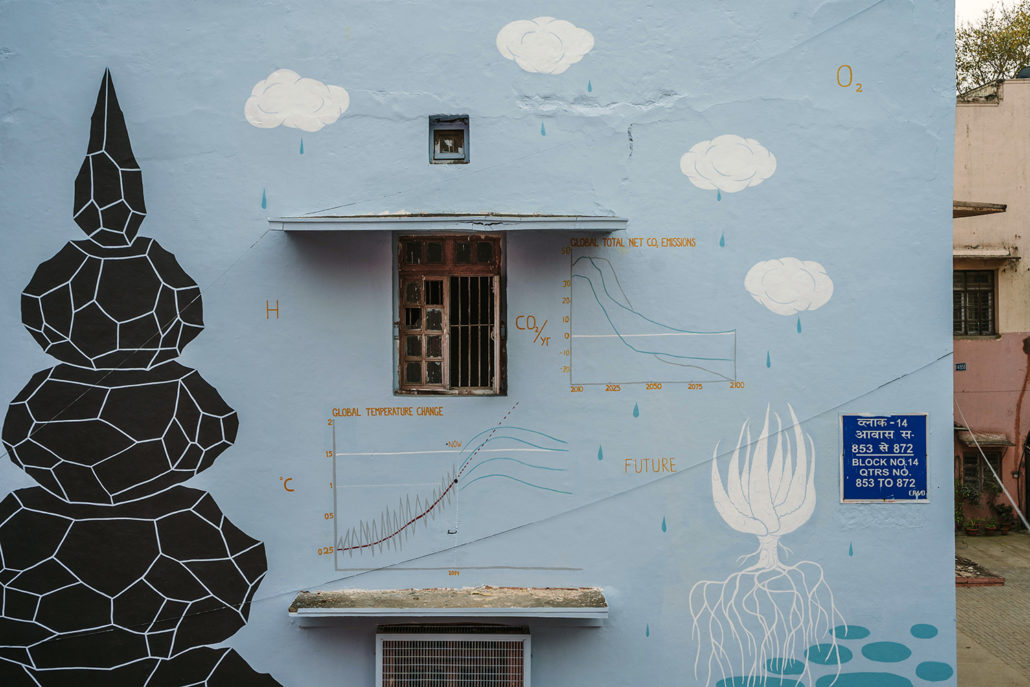 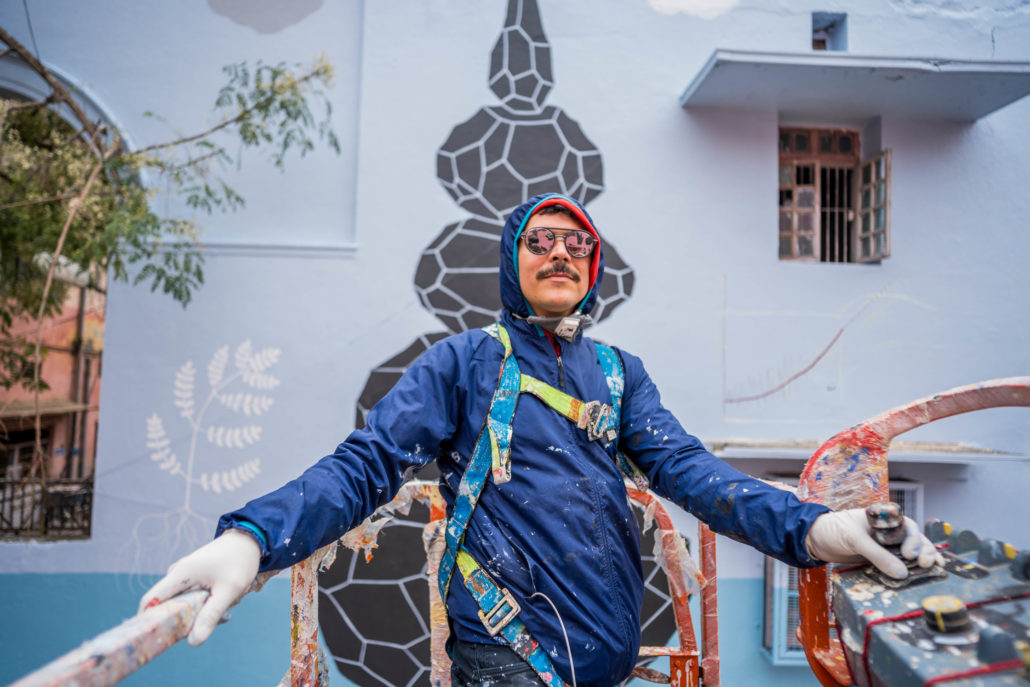 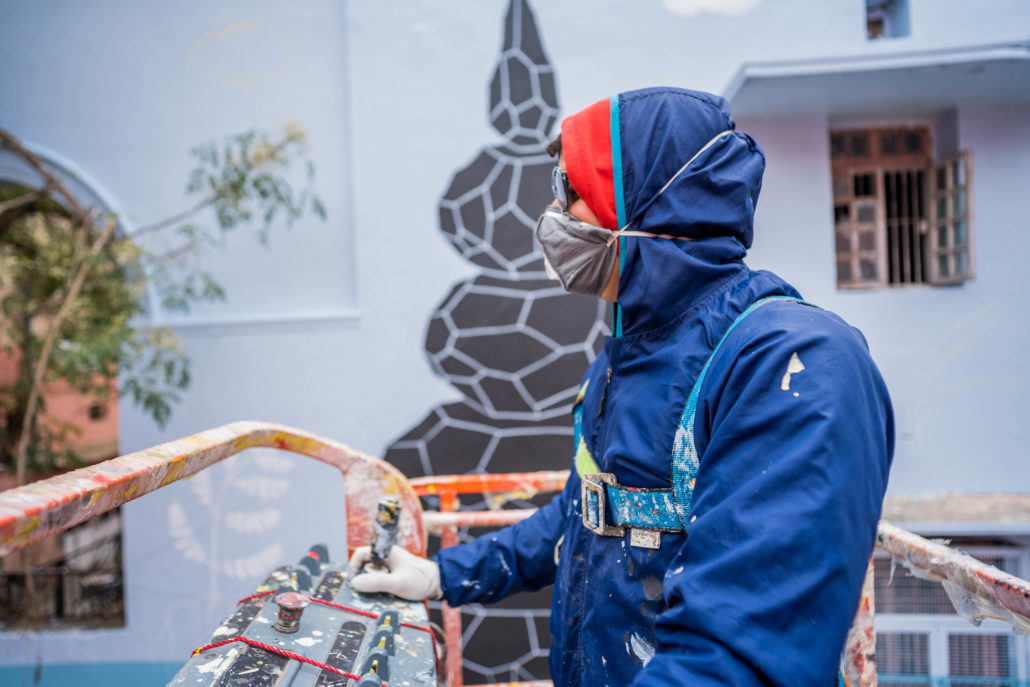 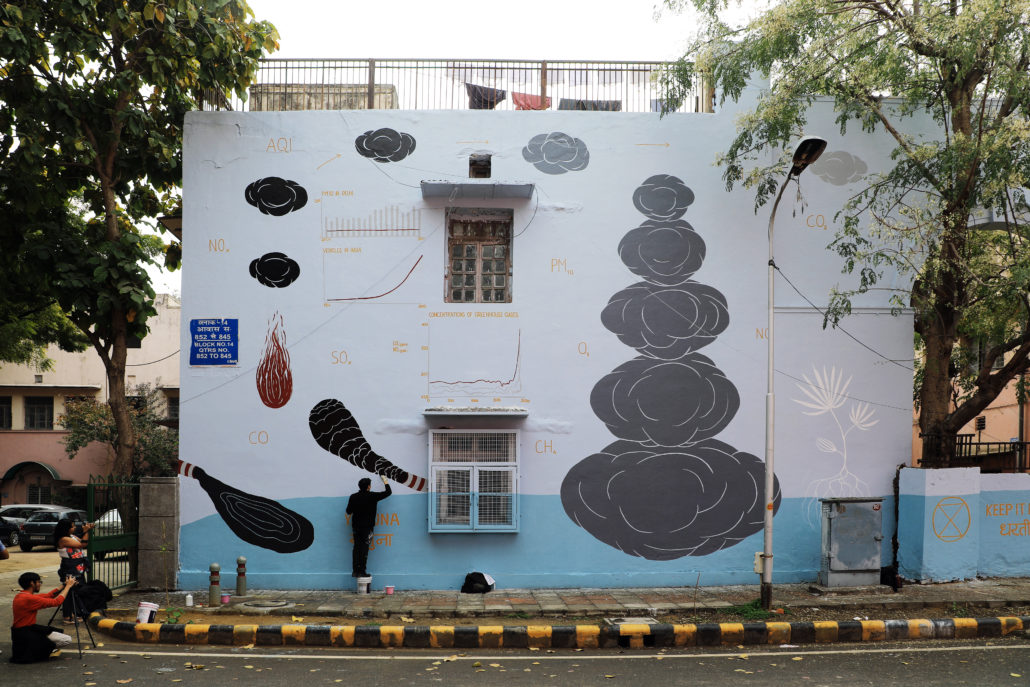 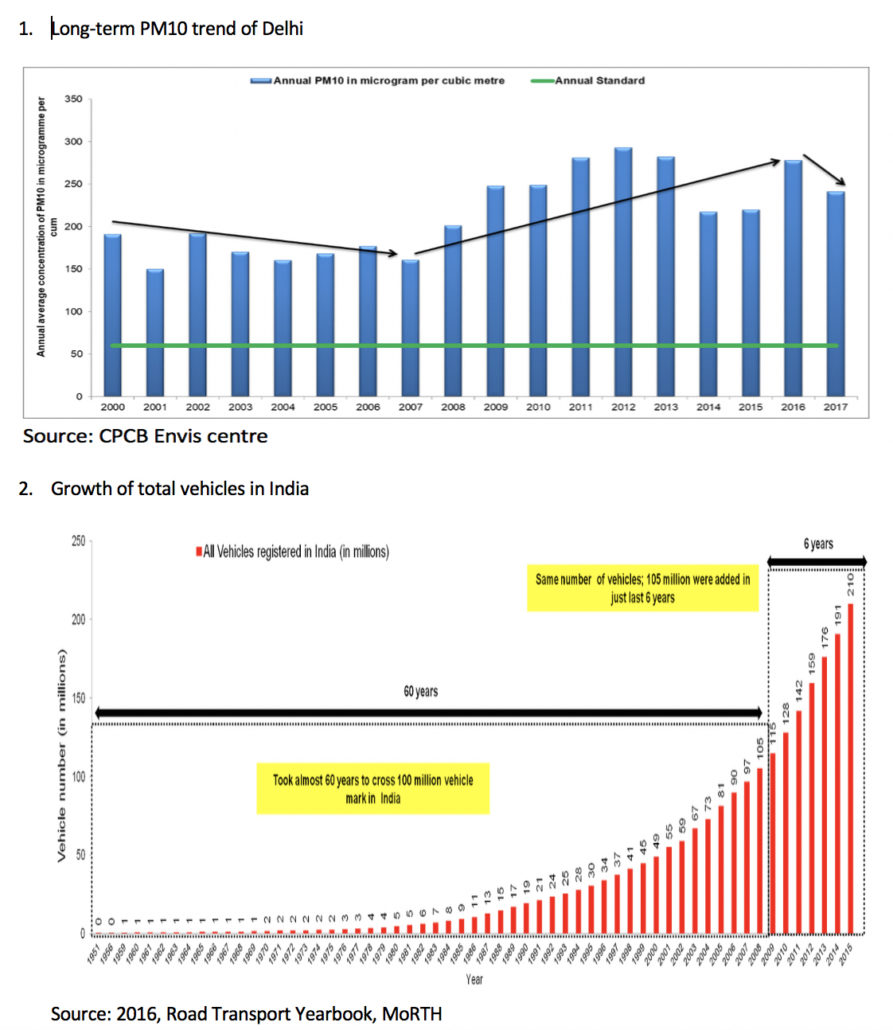 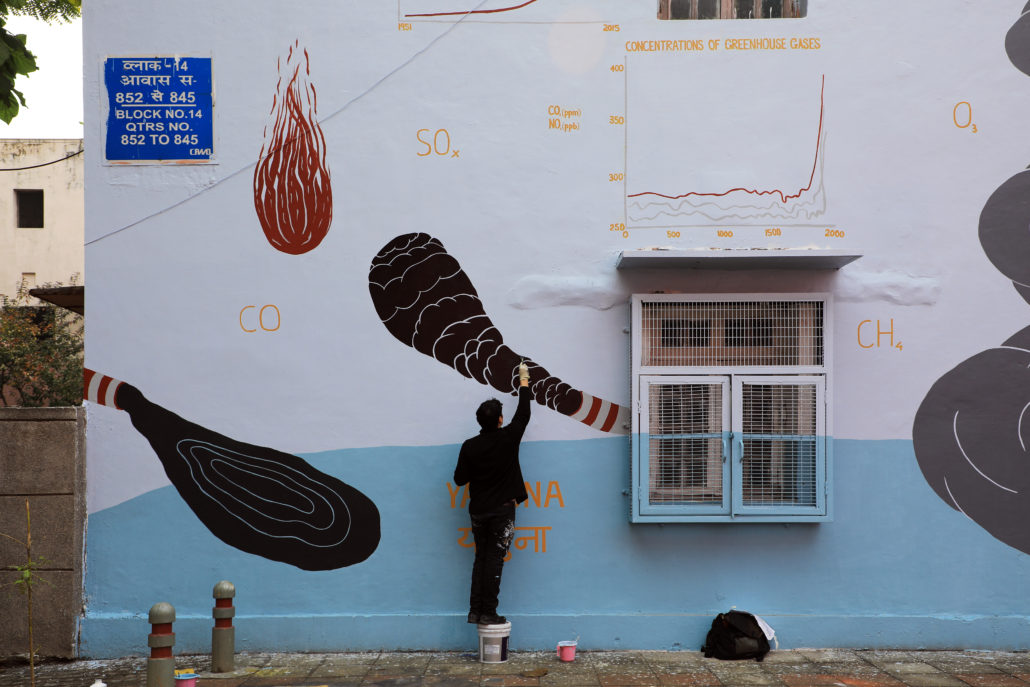 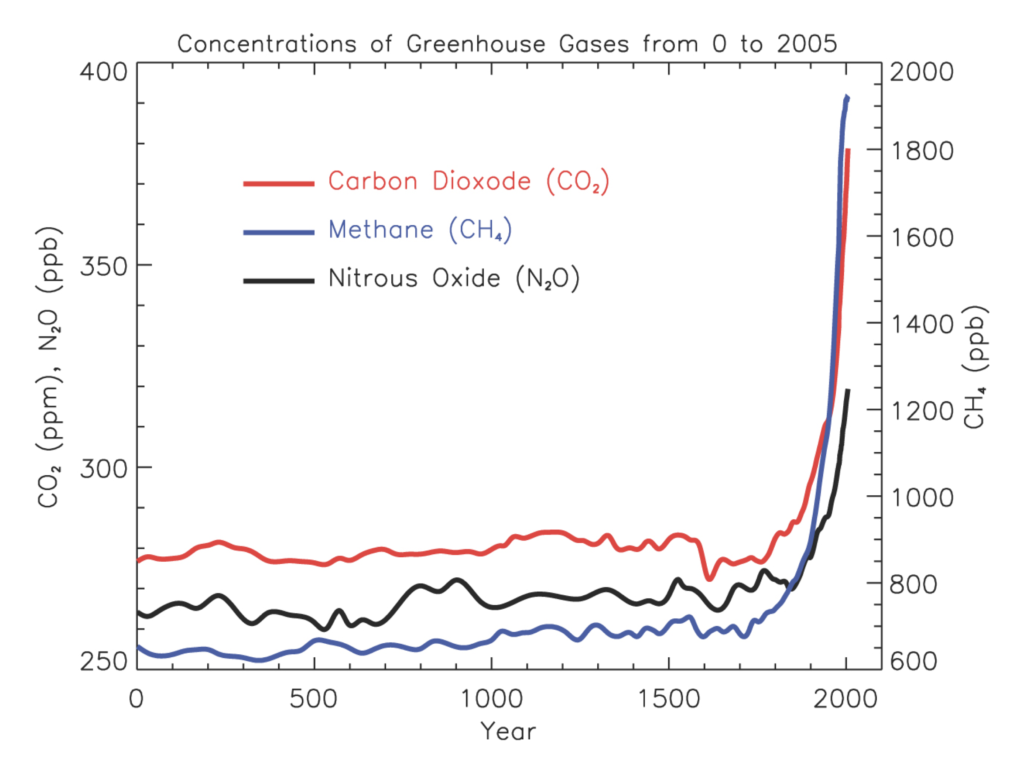 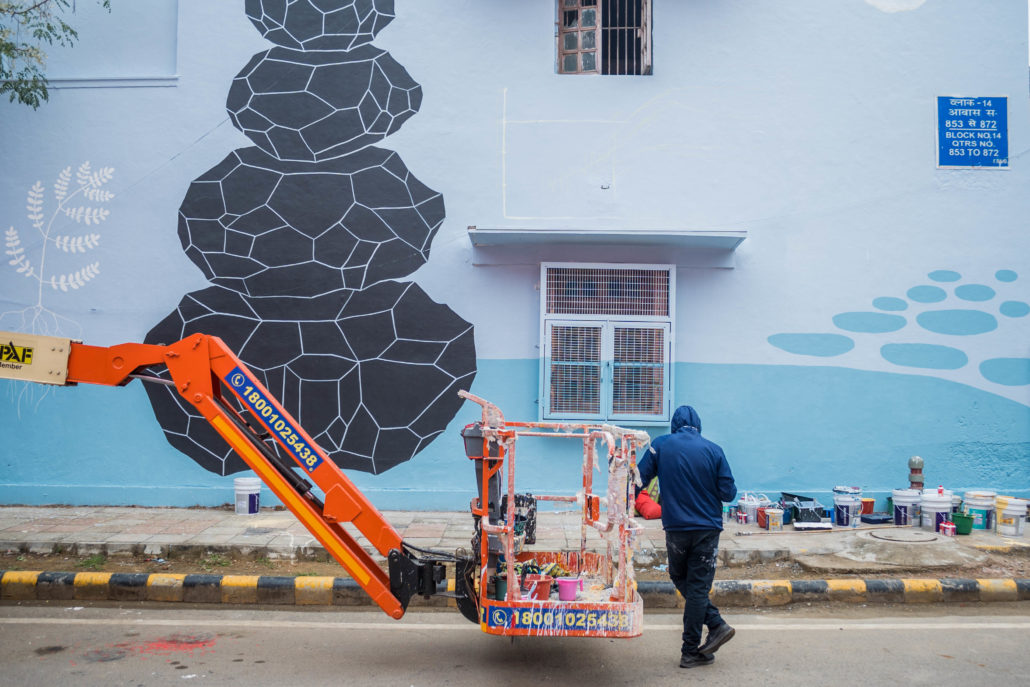 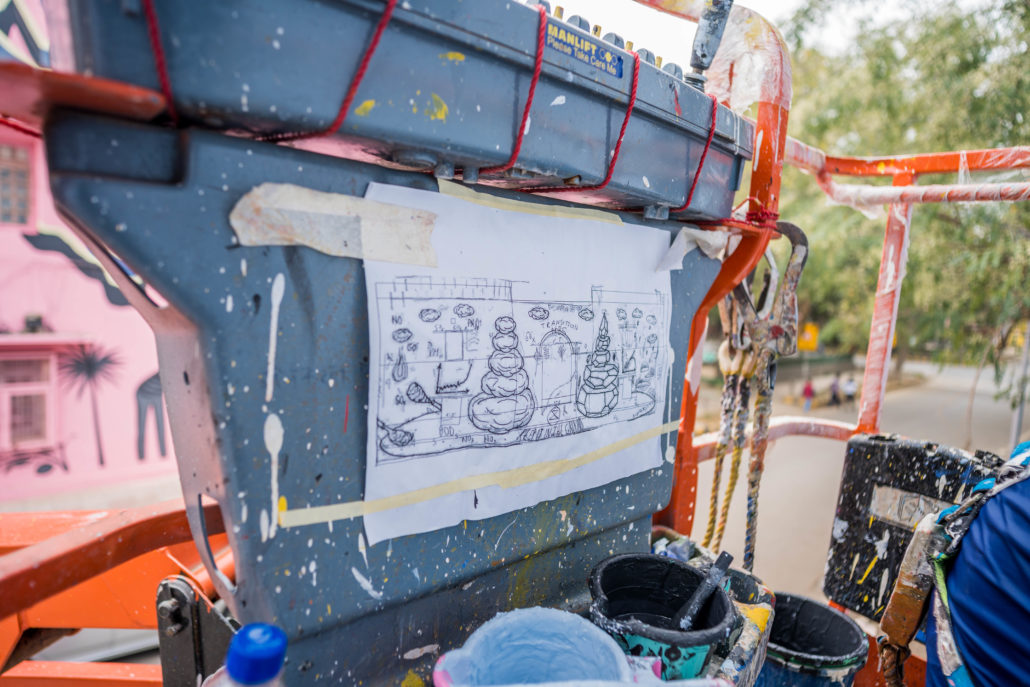 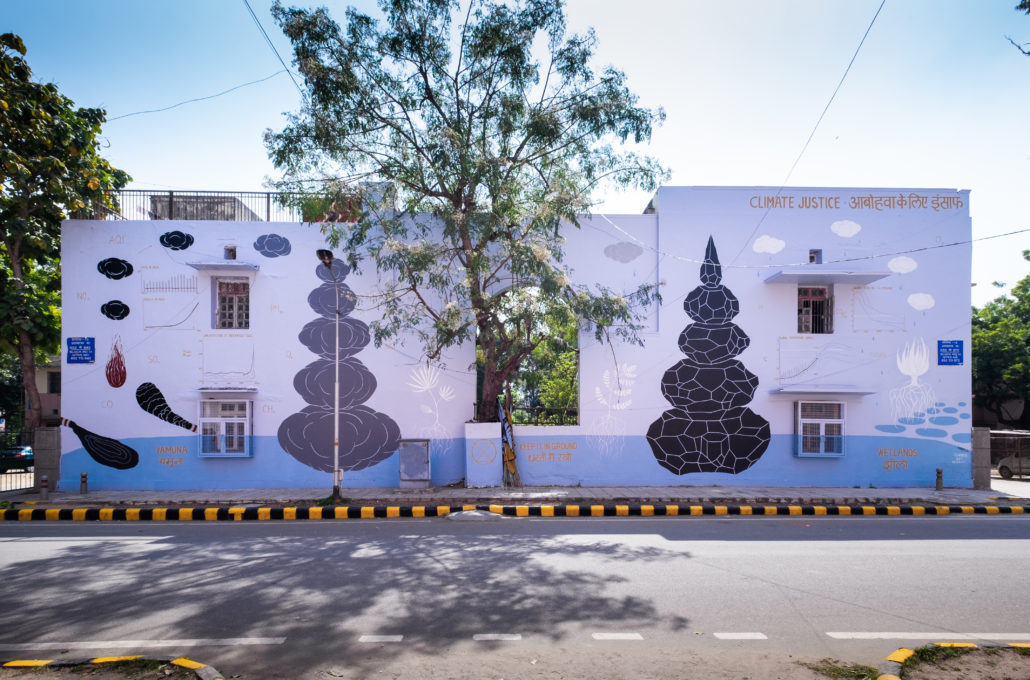 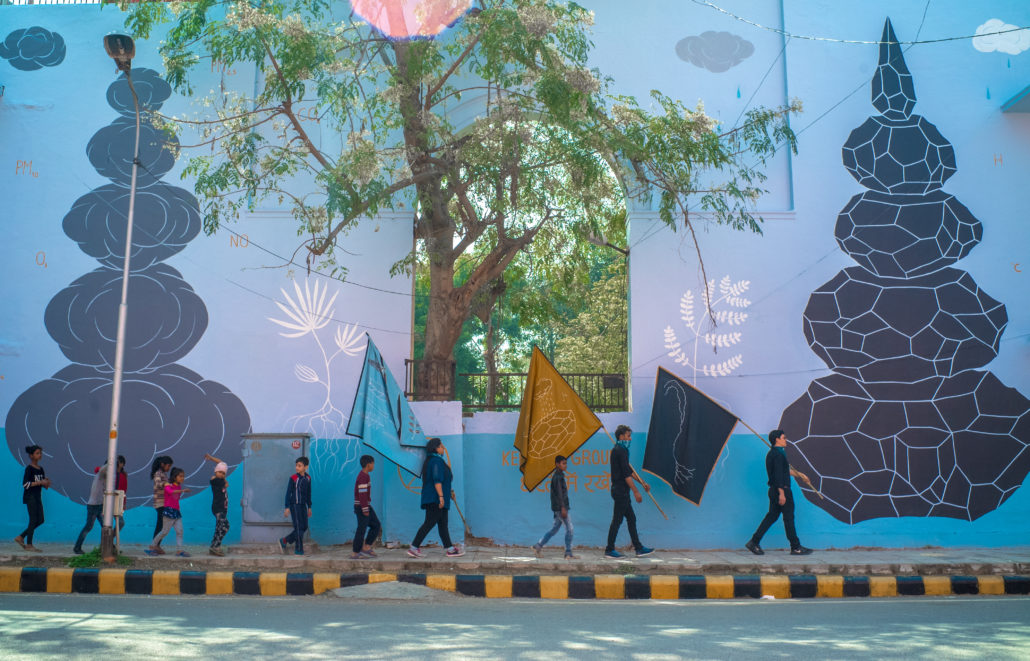 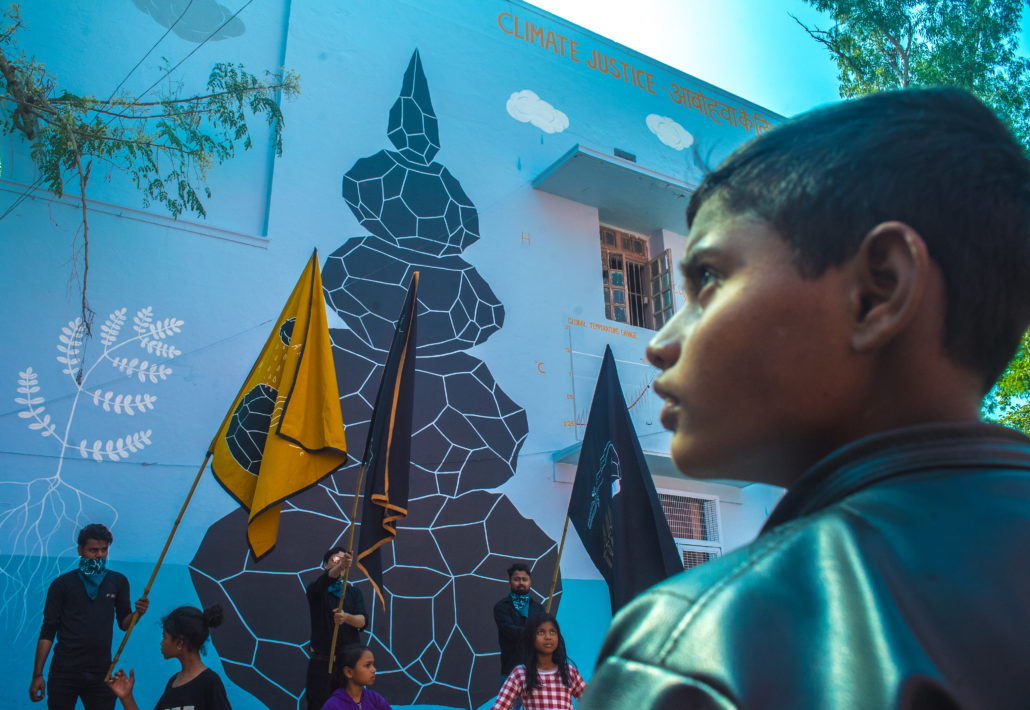 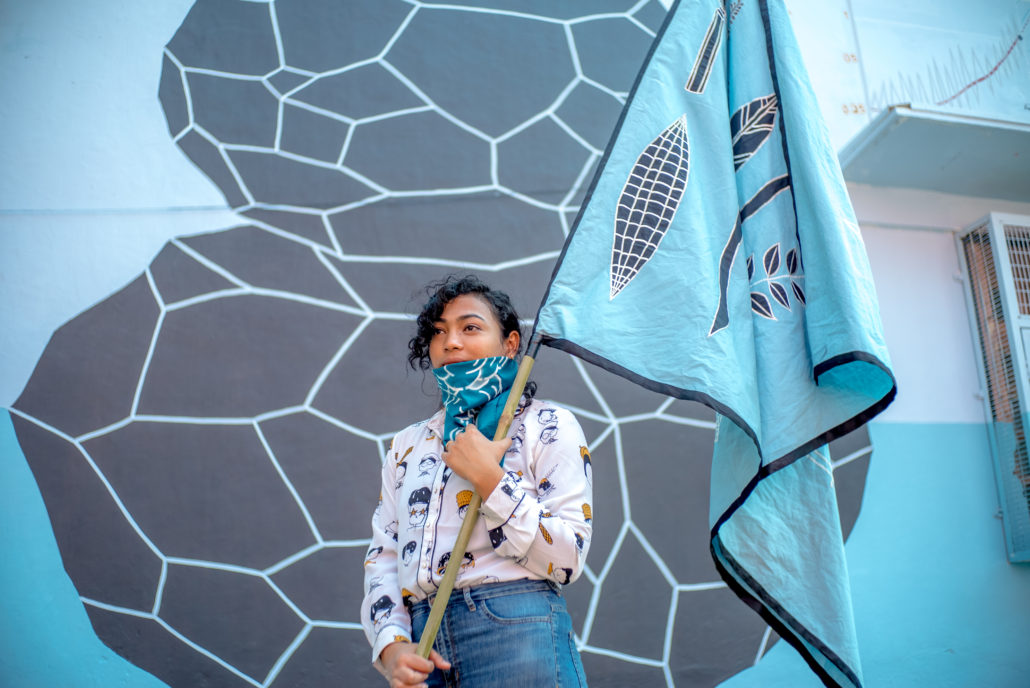 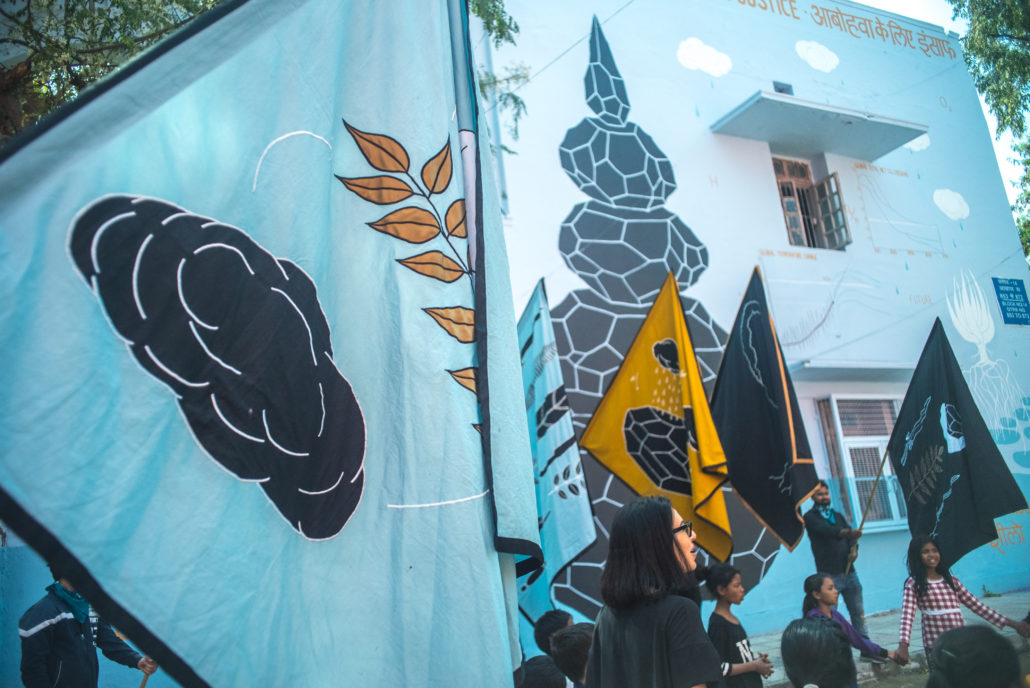 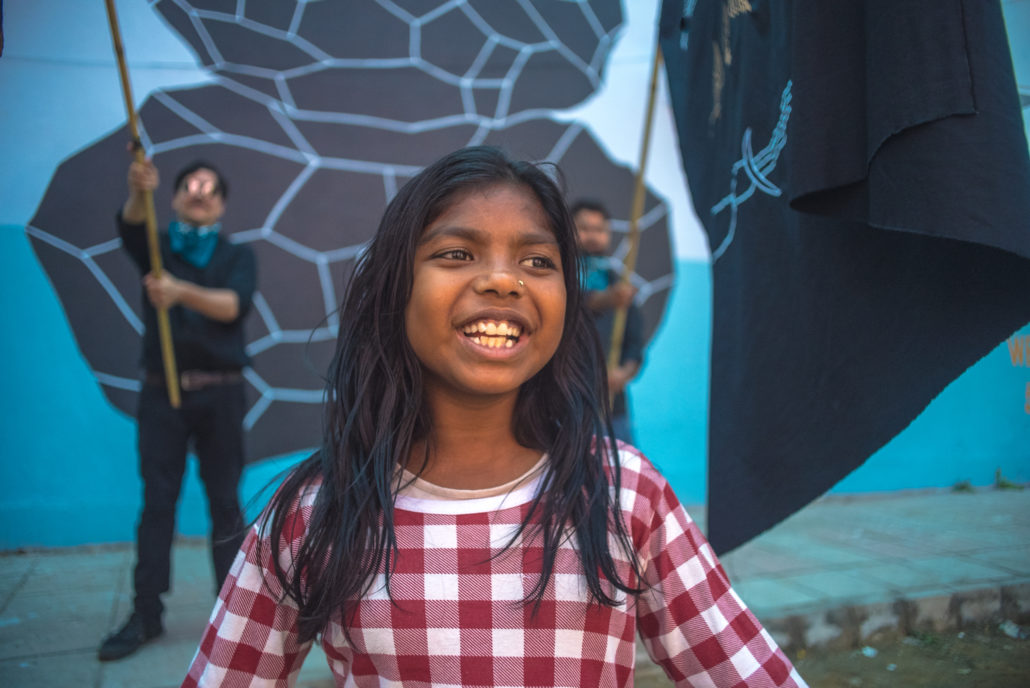 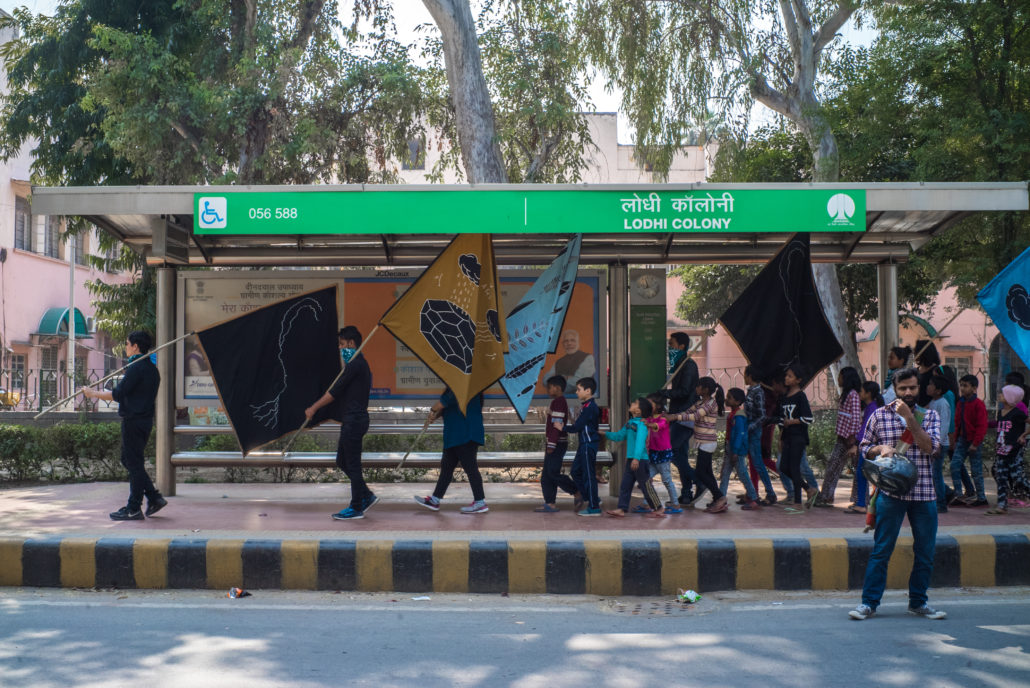 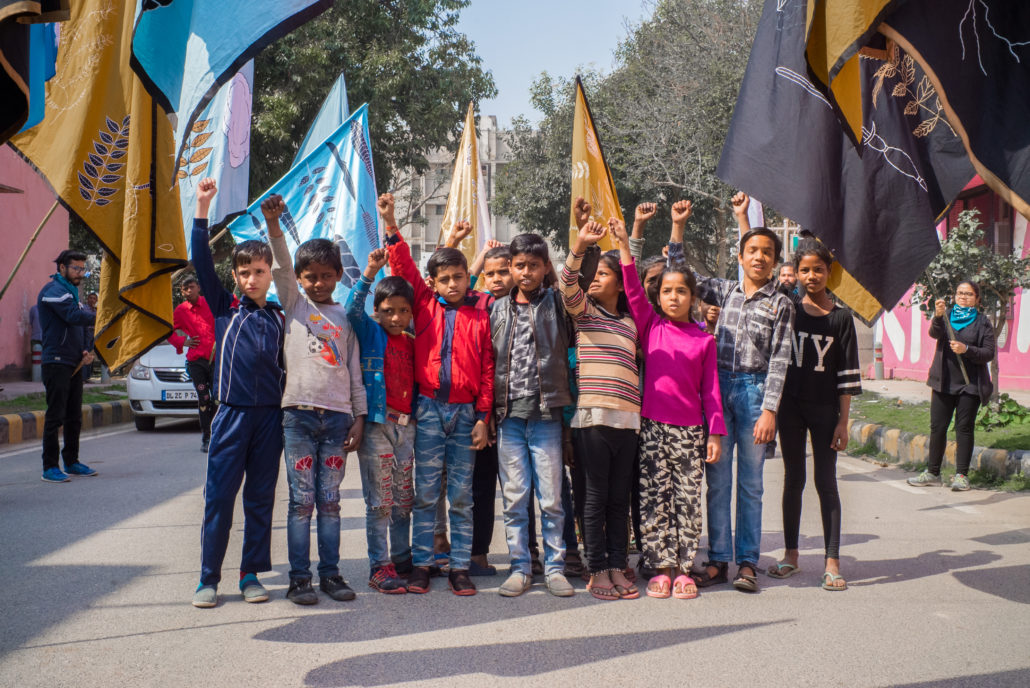 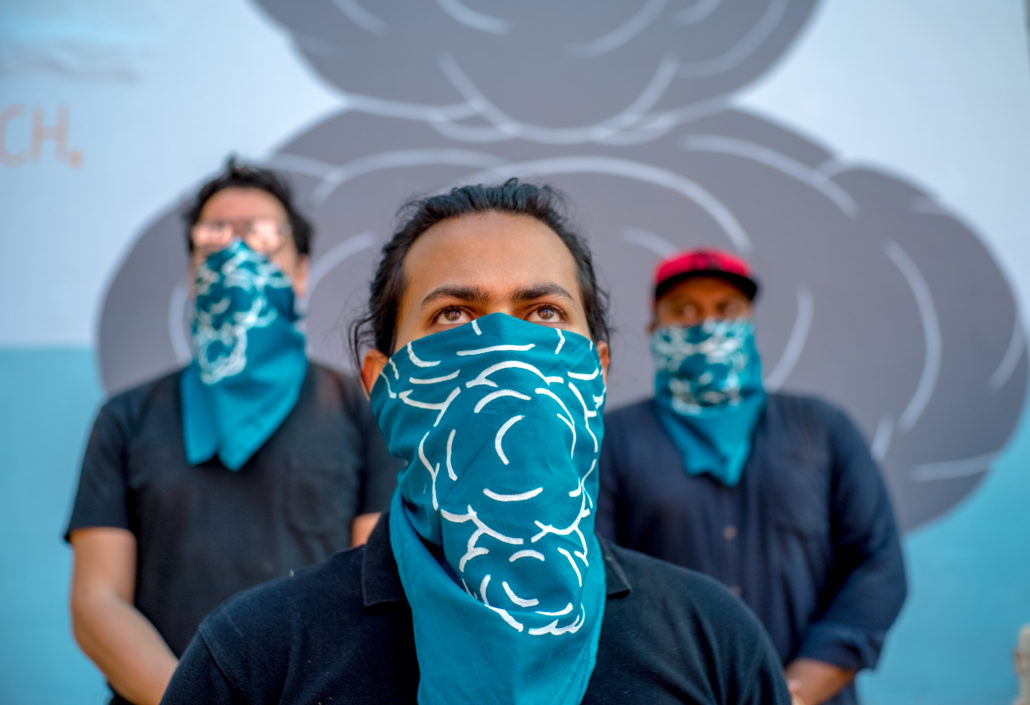 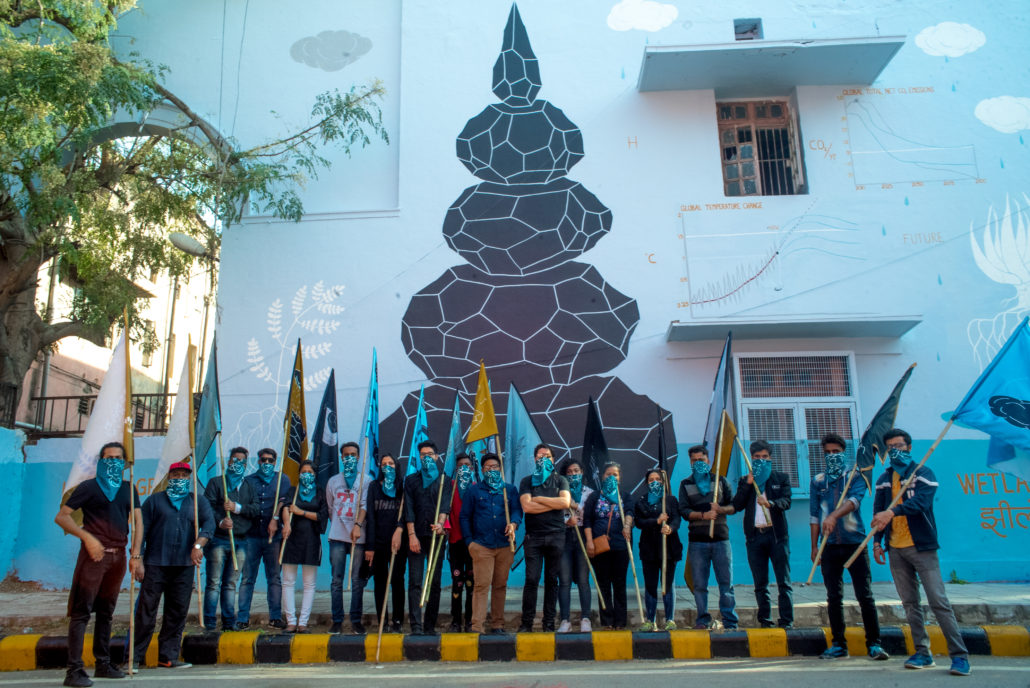 The Italian visual artist Andreco, in collaborates with St+art India, introduce his new Climate Art Project for the first time in India.

Climate 05 – Reclaim Air and Water is a project, a cross between art and science, focussing on the consequences of the climatic changes and the air water pollution in Delhi. In particular the project takes inspiration by the latest studies on the Air quality and the condition of the Yamuna river and aims to underline the best practices for air and water remediation and climate change adaptation and mitigation. Climate 05 – Reclaiming Air and Water is an art – science project and also a call for climate action.

The project, which is part of the urban art festival St+art Delhi 2019, is produced by St+art India’s in collaboration with the Italian Cultural Institute – Delhi, and supported by Asian Paints, amongst other organizations.

Climate 05 – Reclaiming Air and Water, is the fifth step of ANDRECO’s Climate Art Project, which is composed of a series of interventions that took place in different European cities; the project started in Paris in November 2015 during the Cop 21, the UN conference about Climatic Changes, and the last step was performed during the Venice Art Biennial in Italy in 2017.

The Climate 05 – Reclaiming Air and Water quality, project chose Delhi as a symbol, as the city has some of the highest levels of air pollution, according to a majority of studies. In 2018 Delhi was nominated the most air polluted city in the world. The sacred Yamuna River also runs through the city of Delhi. Both the Yamuna and the Ganges, despite being one of the most sacred spots in the world, and being granted same legal rights as human beings by the Indian government, are also two of the most polluted water bodies in the world.

ANDRECO’s choice of Delhi as his next venue for this art project takes inspiration from international research and data drawn from studies by NASA, NOOA, CNR. Indian author Amitav Ghosh’s book “The Great Derangement”, that address the importance of taking a position on climate change, and articles from Vandana Shiva, Sunita Narain and international Climate movements like “Extinction Rebellion” also serve as a source of inspiration for the Italian artist.

ANDRECO painted the air pollution with the air pollution itself. In fact, he used Air Ink, a color made from the smog. The artwork of ANDRECO integrates symbolic figures with chemical elements and scientific graphs and charts, on the basis of studies made by, IPCC (Intergovernmental Panel on Climate Change), NEERI (National environmental Engineer Institute) and CSE (Centre for Science and Environment).

The project includes three different interventions, specifically conceived and developed for the city of Delhi: a big wall painting, a Parade and a talk which will analyse climate change and environmental local issues under a scientific and artistic point of view. (More information given below

The mural at the Lodhi Art District in Lodhi Colony, Delhi represents an artistic translation of the studies about air and water remediation. The wall painting symbolizes the transition of toxic smoke and greenhouse gases, coming from unregulated emissions from industrial pollution, emissions from vehicles and crop burning, into a healthy environment with clean clouds. The transition is made possible due to the tree that stands in the middle of the wall. The wall painting interact with the surrounding landscape of Lodhi Colony.

The parade through the Lodhi neighbourhood will represent another thought about the air and water ecosystem. It will be a collective performance with music and flags that stand for Climate justice and water and air quality in Delhi. The artist has designed flags that represent the Yamuna River, the local best plants for air and the water pollution remediation and other images that represent a vision based on the scientific data.

The third and last intervention will be an academic conference featuring talks by international scientific researchers and international contemporary art protagonists, with the purpose of bringing the concepts and motivations which inspired the project Climate 05 – Reclaiming Air and Water quality, to a broader audience while stimulating a public discussion about the causes and the effects of climate changes, the best practices for water and air remediation, themes which will be crucial both for the city of Delhi and the whole planet.

About the Climate Art Project

The Climate Art Project consists in it, the realization of various site-specific interventions, including installations in the urban spaces, mural paintings, collective performances and talks which aim to create a connection between science and art, a dialogue that translates into works inspired by the latest scientific researches on the causes and the effects of climatic changes. Andreco’s aim for this project is to underline the weaknesses of the territory where his interventions will take place and promote best practices. While in Bari the main theme was the accelerating desertification caused by the rising temperatures, in Portugal the focus was the heat wavers and wild fires, in Venice the focus was the sea level rise, in Delhi the artist’s focus on Air Quality and Water quality.

Andreco was born in Rome, works between art, science and nature. Andreco is a visual artist and also an environmental engineer PhD specialize in sustainable resources management in different climate conditions, he did a Post. Doc researches on green technologies and Nature Based Solutions for urban sustainability collaborating with the School of Engineering and Architecture of the University of Bologna and the Columbia University of New York City. His artistic research is focused on the relation between humans and nature and between the built environment and the natural landscape. Since 2000 Andreco is researching between science, environmental sustainability, activism, urbanism, anthropology, ecology, philosophy, and symbolism, on the base of this cross-disciplinary researches he creates his conceptual and visual language. Andreco uses many techniques to represent his art, from public installations to videos, performance or wall paintings and drawings. Andreco worked for several international festivals, museums and galleries.

St+art India Foundation is an organization formed on the principle of ‘Art for All’ and works on art projects in public spaces. The aim of the foundation is to make art accessible to a wider audience by taking it out of the conventional gallery space and embedding it within the cities we live in – making art truly democratic and for everyone.

In the past six years, the foundation, supported by Asian Paints, has organized 14 St+art festivals and numerous public art projects in Delhi, Mumbai, Bengaluru, Hyderabad, Goa, Coimbatore, Kolkata and Chandigarh. Creating iconic landmarks within all these cities. Each new edition of festivals and public art districts brings to civic spaces curated interventions, which are embedded in urban culture, and activate alternative spaces for art enabling people to reimagine how public spaces can be utilized. For the foundation, which has been responsible for making urban art a movement in India, public art interventions are a celebration of the street as a canvas for visual creativity.