The occupation by a submerged body of a volume which would otherwise be occupied by a fluid. 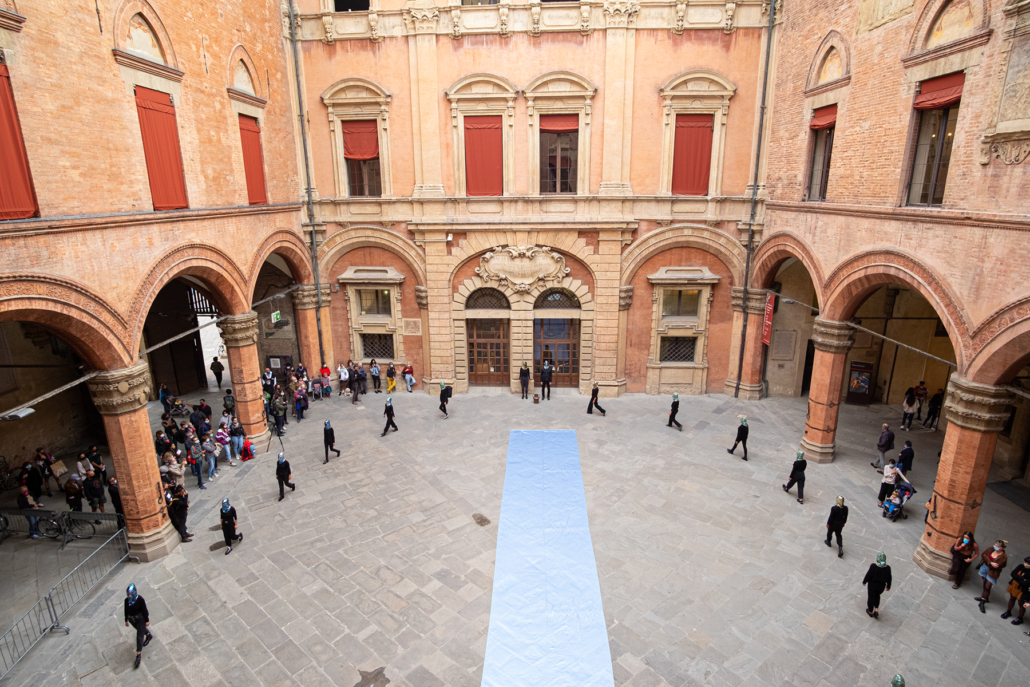 DISPLACEMENT is a collective performative action directed by the visual artist and choreographer Andreco. The performance is dedicated to the consequences of water-related climate changes. In particular, the choreography explores such processes as desertification, flooding, sea level rise and the “displacement” of entire populations caused by these processes. The work reminds us that millions of people are currently forced to migrate and leave territories that have become hostile and unlivable as a result of climate change. This is the main theme of this event, produced by WeWorld in collaboration with the Comune di Bologna as part of the project “marching with the climate” and co-funded by the Italian Agency for Development Cooperation and sustained by the civil society organizations and local authorities all over Italy.

The performance took place in Piazza Maggiore on the 9th of October and became part of the Terrà di tutti Film festival, an important event dedicated to cinema and social documentaries on the rights of the “invisible”.

More than thirty performers fill the piazza. Carrying flags and a long blue drape, through their symbolic and ritual movements they simulate extreme meteorological events such as droughts, desertification, flooding and , sea level rise. The other group of performers carrying flags with rivers and green areas of the Bologna territory on them remind us of “Climate Actions”, virtuous environmental practices, and pay homage to these landscape elements.

The operation in its entirety indicates an auspicious future characterized by the migration acceptance, adapting to climate change, mitigation of impacts, requalification of rivers, parks and wetlands, a future for a society that is sustainable and in harmony with the ecosystem of which it is part.

Andreco, whose research combines science, artistic research and activism, explores relations between human beings and what’s around them, between urban spaces and natural landscapes. Andreco’s projects take various forms, from installation to mobilization actions, and are aimed at creating awareness around climate justice.

“I feel a strong need to talk about environmental and climate crisis and, in particular, about water related topics such as droughts, desertification, flooding, extreme events, sea level rise and “displacement” of entire populations caused by these processes.

For that reason, the performance is also a reflection on “climate migration”, on people who are forced to migrate by the climate change that makes entire geographic areas unlivable. In solidarity with all migrants.

The relation between human beings and water is at the center of this choreography. The performance goes beyond the conversation about the consequences of climate and environmental change and expresses a need for a reaction. This collective work is meant to show a desirable future, achieved through the radical change of the productive system, thanks to virtuous environmental practices and a symbiotic and mutualistic co-existence between all the species inhabiting the earth.” Andreco declared.

“As Andreco emphasized with his performance, we must bring our attention to the importance of water, to the access to the resources, which is made very difficult by the extreme events, but also by other factors such as desertification and soil erosion, which affect the most vulnerable communities. MAPA, most affected people and areas, as they have been defined by the youth environmental movements, are the communities we work with daily, which are least responsible for climate changes but are also the ones that are most impacted by the consequences and the least prepared ones in terms of resources one needs in order to adapt and mitigate the risks.” – Piziali from Weworld concludes.

Climate changes deteriorate our life and, in some countries, they make life impossible, forcing people to migrate.

We need to be brave now! Let’s ask institutions to be radical when it comes to climate emergency, to divest of fossil fuel and to move to a model of society in which ecology is at the center and there are rights for all.